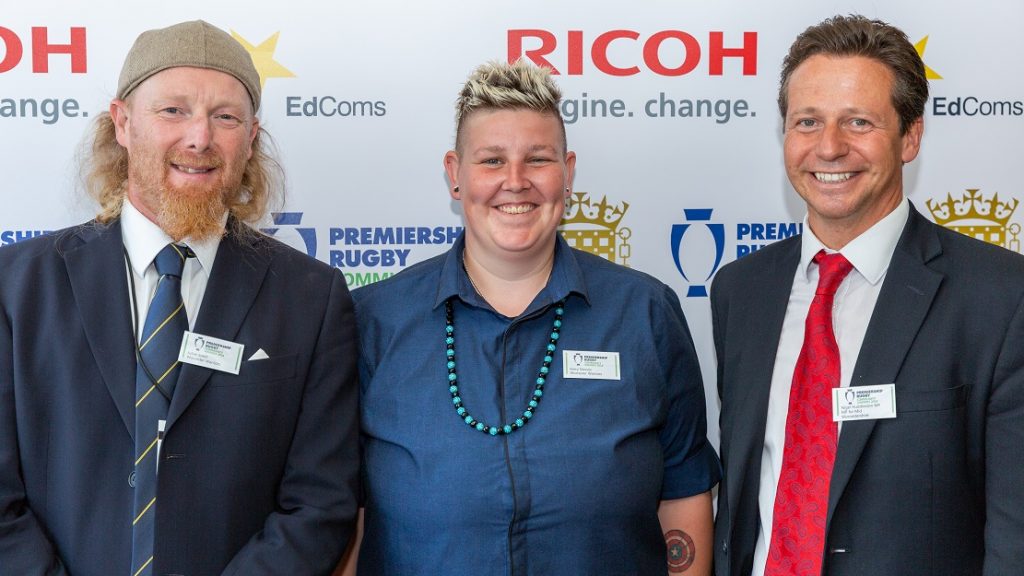 Minister for Sport Tracey Crouch was full of praise as five inspiring individuals were honoured at the glittering Premiership Rugby Parliamentary Community Awards at the House of Commons last month.

Every year, hundreds of people up and down the country give their time to help run Premiership Rugby initiatives such as – but not limited to – Aviva Tackling Numbers, HITZ, Project Rugby and Move Like A Pro.

And following a tough judging process, 13 were shortlisted for four prizes and travelled to London to rub shoulders with the great and the good of English rugby, such as Olympic silver medallist Marcus Watson and Harlequins’ Dave Ward.

Minister for Sport Tracey Crouch and Paul Farrelly MP, Newcastle Under Lyme, and Vice Chair of the All Party Rugby Union Group, were also present as four winners were chosen to join these names on stage to collect their prizes.

Tracey Crouch said: “Sports like rugby have a unique power to improve lives. These inspirational players, volunteers and coaches show how sport teaches important skills, boosts mental and physical health, and brings people together. I am delighted they have been recognised for their work.”

Paul Farrelly MP said: “In the All Party Rugby Union Group, we know rugby can inspire positive change.  It is a pleasure, therefore, for us to host these Awards. I applaud the volunteers, coaches, clubs, charities and players who make these projects happen and look forward to seeing the work continue over the coming years.”

The first award of the afternoon was the PLAY Achiever Award – supported by Premiership Rugby –  and the judging panel were unable to separate Seth Mensah and Kerry Simons from Harlequins and Worcester Warriors respectively, meaning they were joint winners of the gong.

Congratulations Seth! The joint winner of the PLAY Achiever of the Year at this season’s @premrugby Parliamentary Community Awards https://t.co/O8IkD8UhNq

Homeless Rugby Director Darran Martin said: ‘It’s great to see our players from Worcester nominated and winning Premiership Rugby awards. They have shown the postive impact rugby and the community can have with people affected by homelessness and we are always looking for new clubs, coaches and charities to help us create new teams. Well done to our Worcester players, and all the nominees and winners on the day.’

If you’ve been inspired by the work of Homeless Rugby and want to create a positive rugby opportunity for people affected by homelessness in your area contact Darran Martin at darran@homelessrugby.org.